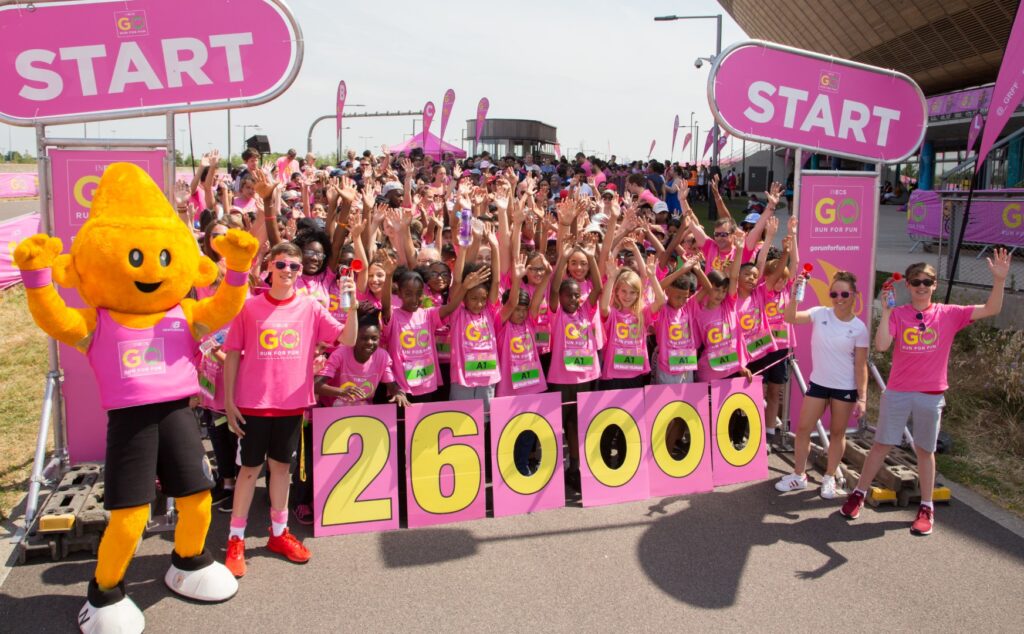 The event took place on Wednesday 04 July 2018 and saw over 3,000 children run across two events, at the famous road circuit track in the Lee Valley VeloPark, Queen Elizabeth Olympic Park.

Artistic gymnast Amy Tinkler, who is a three times European Medallist and 2016 Rio Olympic Bronze Medallist, attended the event and participated in a live Q&A with the primary school children. Amy said: “I love being in a position to inspire young children to get involved in sport, and this is a fantastic event with thousands of children participating in exercise and having fun.

“Gymnastics has impacted my life massively; I have met so many people and travelled around the world, represented my country many times with the biggest honours at the Olympic Games in Rio 2016. Not only am I honoured and privileged to come to events like this, it’s also great to see GO Run For Fun inspiring the next generation.”

Max & Harvey also made a musical appearance for the young crowd for the second year in a row, performing their hit single ‘One More Day in Love’.

As event ambassadors, when asked about the GO Run For Fun event, the identical twins who shot to fame through the singing app Musical.ly said they love the enthusiasm of all the kids, finding it particularly inspiring and a great opportunity to get fit in a fun way.

The event was partnered with Cumberland School Sport Partnership, which aided in organising the 45 primary schools that took part.

Back in April 2018, 15 schools attended a GO Run For Fun Health & Wellbeing event, where two pupils from each school were trained as Special Agents with the mission to get their school healthy and active. The event welcomed the Special Agents back to discuss how their six missions went ahead of the run.

The programme is supported by INEOS, a multinational company headquartered in London, with health and fitness at the heart of its ethos.

“GO Run for Fun and The Daily Mile have been making a positive impact on the health and well-being of hundreds of thousands of children in the UK and beyond for the last four years. We are very proud to support these two initiatives and everyone who runs in them.”

GO Run For Fun organises free running events across the world to inspire children to be more active. To find out more about GO Run For Fun, visit www.thedailymileevents.com or stay up to date on Facebook, Twitter, or Instagram.